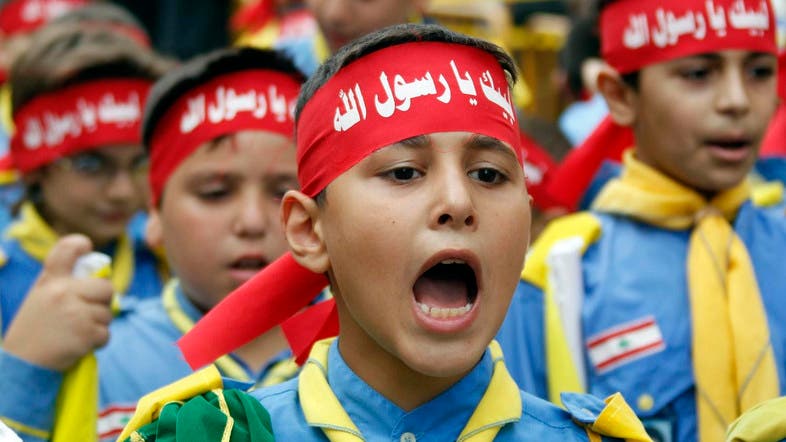 As long as there are terror entities in the shape of the Iranian Revolutionary Guard Corps (IRGC) and its proxy Hezbollah, using the state system to brainwash youngsters into carrying out acts of terror in foreign lands, there will never be an end to terrorism.

As far as Hezbollah is concerned, it will never run out of cannon fodder, as thousands of child conscripts are being trained within its scouting groups, and are always waiting in the pipeline, ready to take up the challenge of becoming a suicide bomber or proxy warrior within the Shiite militia’s ever-diminishing ranks. The conflict in Syria has certainly taken a toll, as Hezbollah warriors die dutifully in droves for their Iranian paymasters.

Children as young as eight, who have joined the ranks of Hezbollah’s Imam al-Mahdi Scouts, are being brain-washed into learning the concepts of Ayatollah Ruhollah Khomeini’s radical Shiite ideology, ready to be unleashed across the globe as part of Iran’s terror machine. As far as Hezbollah is concerned, they like to catch their conscripts at the earliest of age, and one of their favoured methods is to sign them up as Imam al-Mahdi Scouts, the youth wing of their fighting machine.

The whole point of this exercise is to program a child’s developing brain, through teaching it the concept of martyrdom, while influencing their hearts and minds, with the use of an intense program of brain washing. At summer camps, which are designed to accommodate children under the age of 10, and youths up to the age of 20, the scouts undergo military training, as well as taking part in various sporting activities.

On a much darker side, while being dehumanized through indoctrination of radical Shiite ideology, the young novices are taught hatred of Israel, a loathing for Western culture, reverence to Iran’s Supreme Leader Ali Khamenei, and at the same time, those attending these camps are expected to swear allegiance to Hassan Nasrallah, the current Secretary General of the Lebanese political and paramilitary party Hezbollah.

Whilst taking part in parades, which come as part of the scouting curriculum, the youngsters are often seen attired in military-style uniforms, they also wear berets, and at times, headbands emblazon their foreheads bearing slogans such as “Oh Jerusalem, we are coming”, while on other occasions, scouts have been seen to wear combat paint streaked on their faces, and carry plastic rifles.

The fleur-de-lis is the internationally recognized emblem of the scout movement, a badge containing this emblem is worn by the Imam al-Mahdi Scouts, and just like all other scout troops worldwide, their emblem contains an element of their own distinction, which in the case of the Hezbollah troop contains two swords either side of it, a hand raised as if taking an oath, and it also displays an inscription beneath it reading “Obey!”

As a fighting unit, Hezbollah is no more than a proxy wing of the Iranian Revolutionary Guard Corps (IRGC). It’s function to carry out terror attacks, as well as fight in conflicts in foreign countries on behalf of the group.

With the IRGC Qods Force having moulded the Lebanese militia since its inception, having now found itself entangled in the Syrian Civil War, the IRGC finds it needs Hezbollah more than ever, and adding this to the war against ISIS that has broken out in Iraq, both military campaigns have drawn the Iranian regime ever deeper into a conflict that seems to have no end in sight.

To avoid a heavy body count, which would impact on public opinion back home, the Iranian regime has been using Hezbollah, and other foreign militias, to take on the heavy end of the fighting, in a bid to keep their own casualties to a minimum, which has left Hezbollah desperate for recruits.

Having suffered heavy losses on the battlefield over recent years, Hezbollah has been working hard to bring young recruits into its ranks, needing to create a new generation of operatives with which to replenish its battle-scarred units.

So, at a network of Imam al-Mahdi Scout camps, said to be set up in the Shiite districts of Beirut, the Beqaa Valley and South Lebanon, potential conscripts are put through rigorous military training, as well as heavy indoctrination, preparing them to take on the role of “resistance” fighters.

Hezbollah al-Mahdi scouts ride their motorcycle as they parade during an event for Jerusalem day or Al-Quds day, at the southern town of Nabatiyeh, Lebanon, Aug. 1, 2013. (AP)

As they progress in their training, in the minds of many of these raw recruits, they see themselves in pursuit of the “greater jihad”, and that by sacrificing their lives for Khamenei, they are convinced they will undergo a spiritual transformation that transports them straight to heaven.

One method of indoctrination used to influence these isolated youngsters, are books and magazines extolling the virtues of Khamenei, plus all other aspects of Iranian Shiite doctrine, and once the indoctrinated child reaches seventeen years-old, if the young scout excels in his training, his trainer approaches him with an offer to join the ranks of Hezbollah’s armed resistance group.

As far as Hezbollah is concerned, its president is the Supreme Leader of Iran, Ali Khamenei, who is held in an aura of godliness by the faithful, who look upon him as the delegate of Imam Mahdi, or God’s representative on earth, and as such, they emulate him to the status of being the most divine individual alive, who cannot be equalled among mankind.

With Hezbollah being a dutiful proxy of Iran, the values of Iranian radical Shiite doctrine are brought into play throughout the training of the Imam al-Mahdi recruits, nurturing the child on terrorist culture, whilst glorifying the terror group’s past martyrs, most of whom have died due to their connection to Hezbollah’s terrorist activities.

Established in 1985, the Imam al-Mahdi Scouts is believed to have around 50,000 members, who are distributed amongst more than 500 regiments, many of whom will eventually enter Hezbollah’s armed wing, or will go on to become ardent activists of the group. Even the remainder who do not take up a vocation within the organisation, will still have become heavily indoctrinated as to radical Shiite ideology, passing it on to family and friends.

The main topic on the curriculum of the al-Mahdi scouts has always been the destruction of Israel, they are also taught that becoming a martyr to protect their land is the highest of virtues, and during these intensive summer courses, scouts are also taught weapons skills, and take part in target practice. But there is also a lighter side to lessons, where youngsters are taught to read and write, they are also taught computer skills, and lessons in administration.